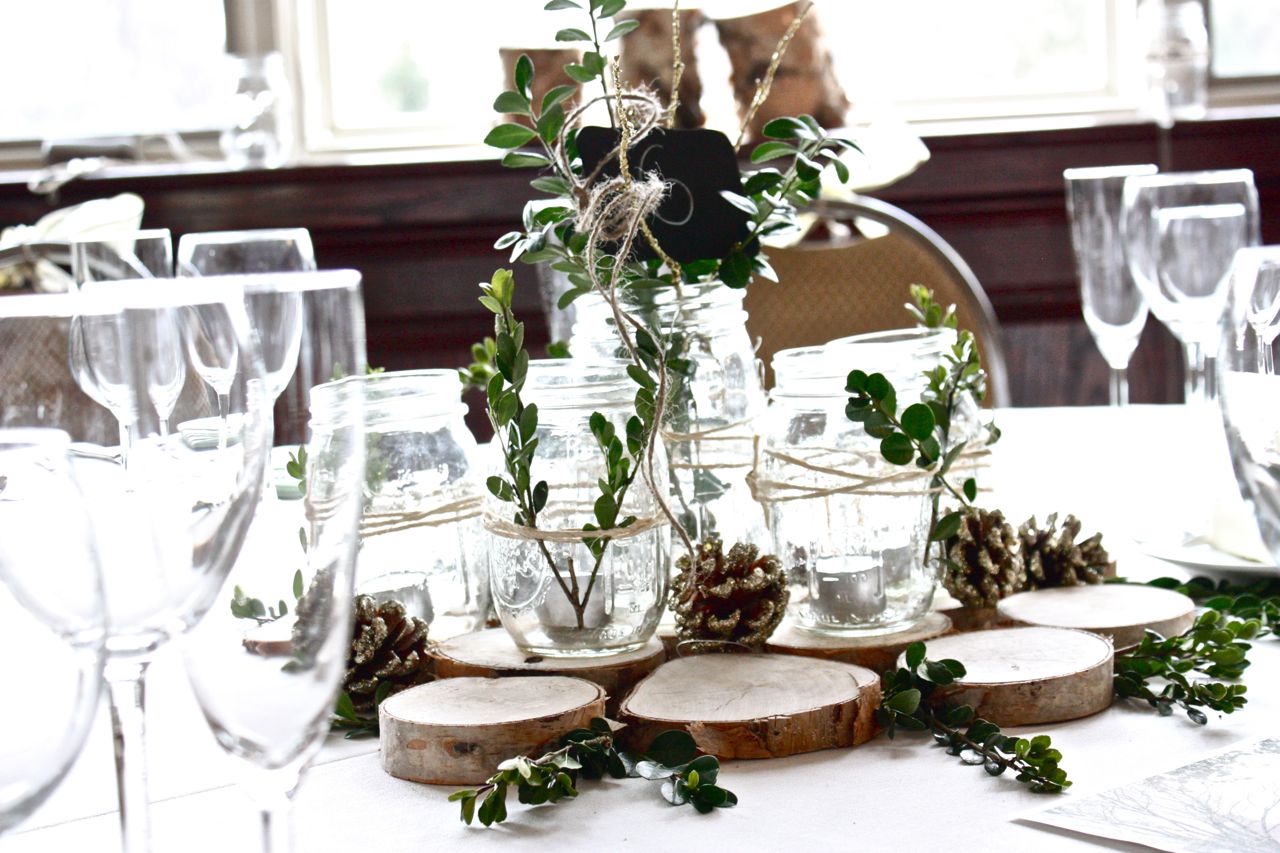 The weekend after Christmas, I helped a very lovely couple decorate the reception hall for their wedding.  It was my first wedding design....and I learned a lot. A LOT! 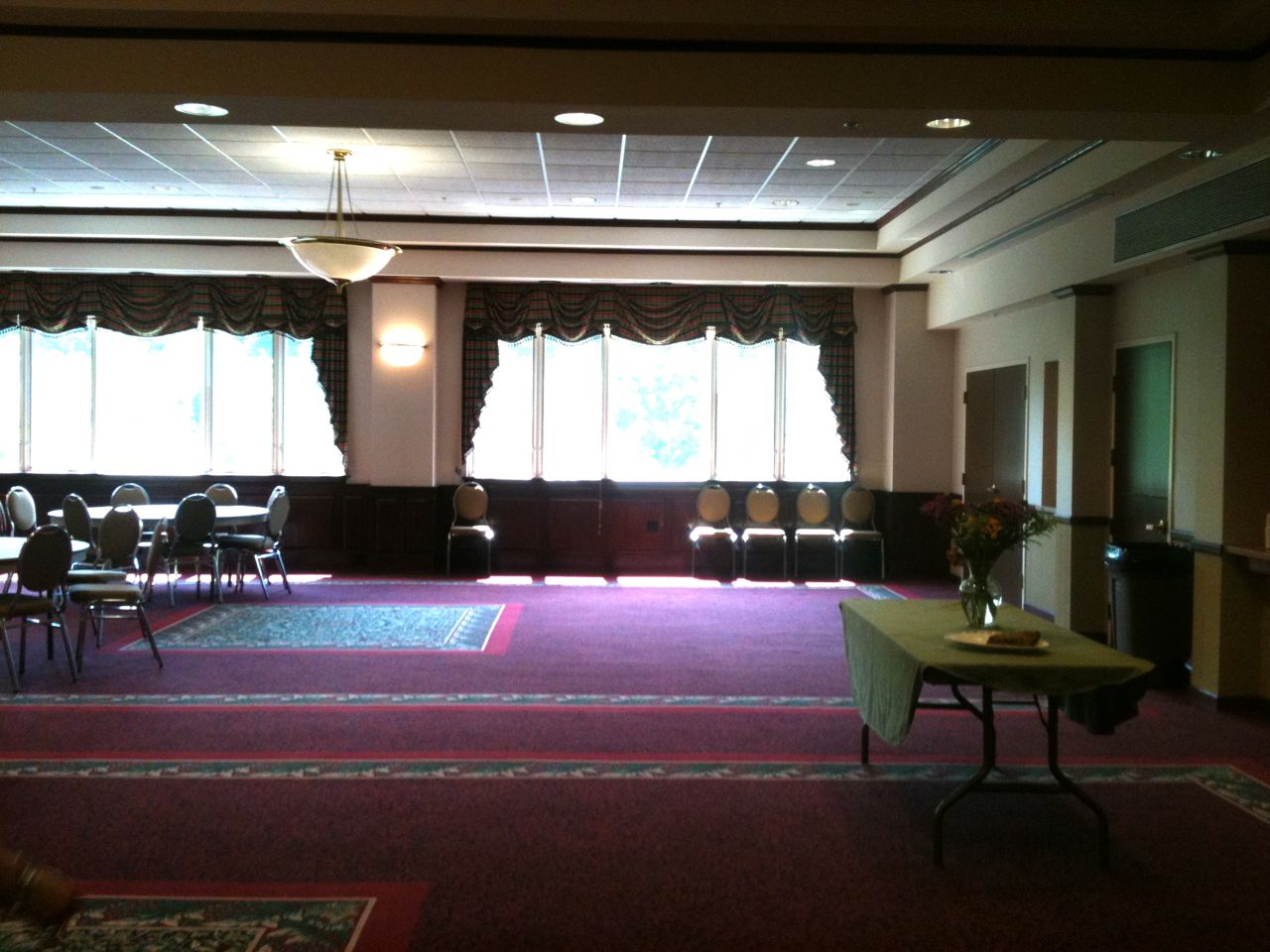 Not totally awful, but definitely not a barn. And not the least bit rustic either. And althought the wedding was just after Christmas and the colors of the hall were red and green, the bride was adamantly opposed to playing up the Christmas theme. So we started brainstorming. She had a whole binder full of ideas already, and we narrowed the feel down to Williamsburg during the winter--perfect!  The wedding was in Virginia, but Williamsburg also has special significance for them since it was the place where they were engaged. And the groom went to William & Mary.

Plus it was a great way to marry the traditional details of the reception hall with the rustic vibe she wanted since Williamsburg decorations, even the elaborate ones, are always made of natural materials. And we could make good use of the feeling of the Christmas season without having it feel overtly Christmasy.

The challenge was doing it on a modest budget. If you've been to Williamsburg or searched around for Williamsburg decorations, you know"inexpensive" is not one of the words you'll find among the descriptions. So we focused more on getting the feel down than actually imitating anything specifically Williamsburg. This meant all natural materials with a little bit of a refined edge.

After that weekend, I think it's safe to say that boxwood is my new favorite green! It came to the rescue many times, and was a great link between the rustic/colonial hybrid feeling we were after, the existing traditional decoration of the hall, and the budget. We ordered the beautiful wreaths from a local nursery, and raided the grooms' parents bushes for everything else. 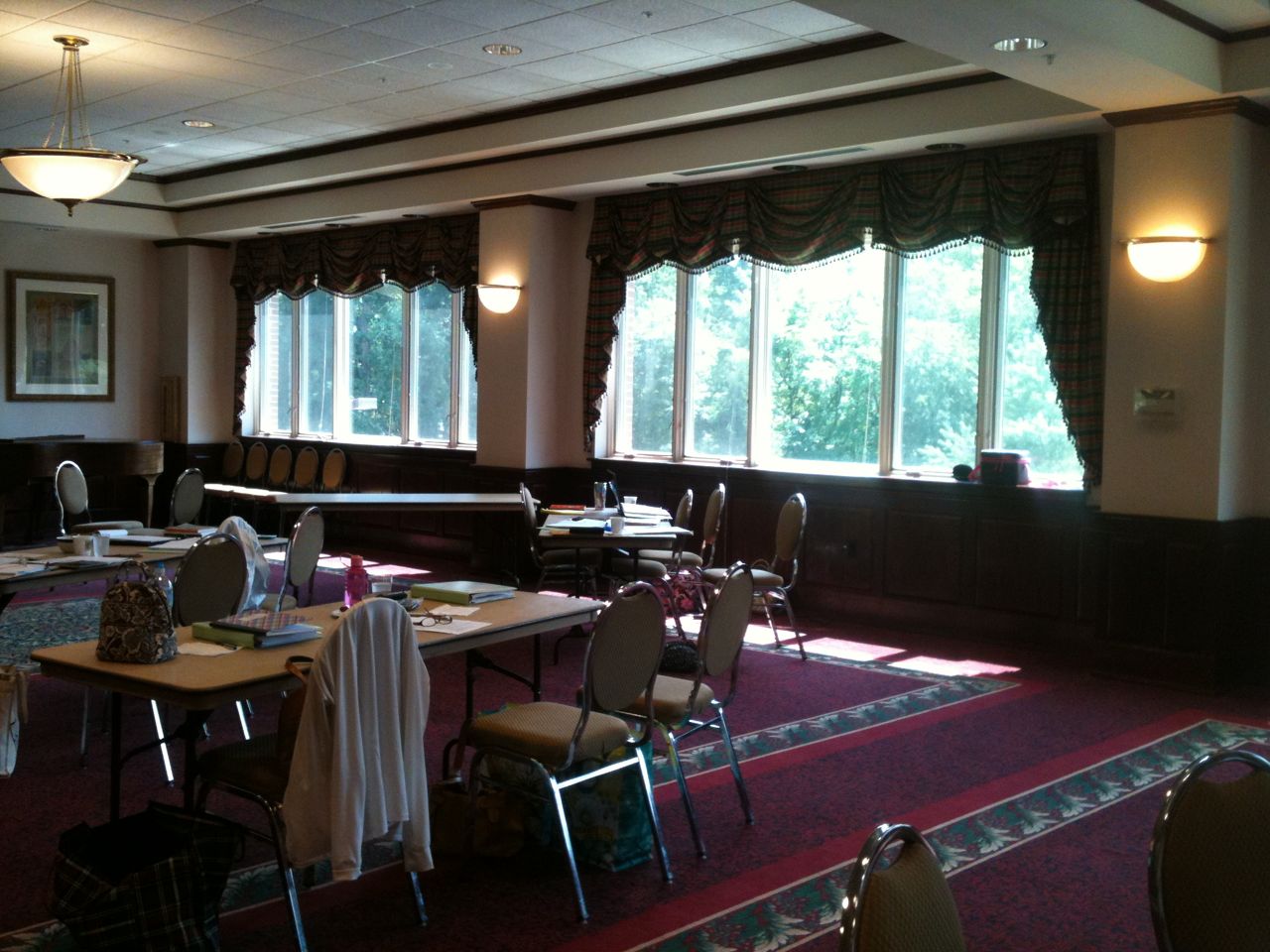 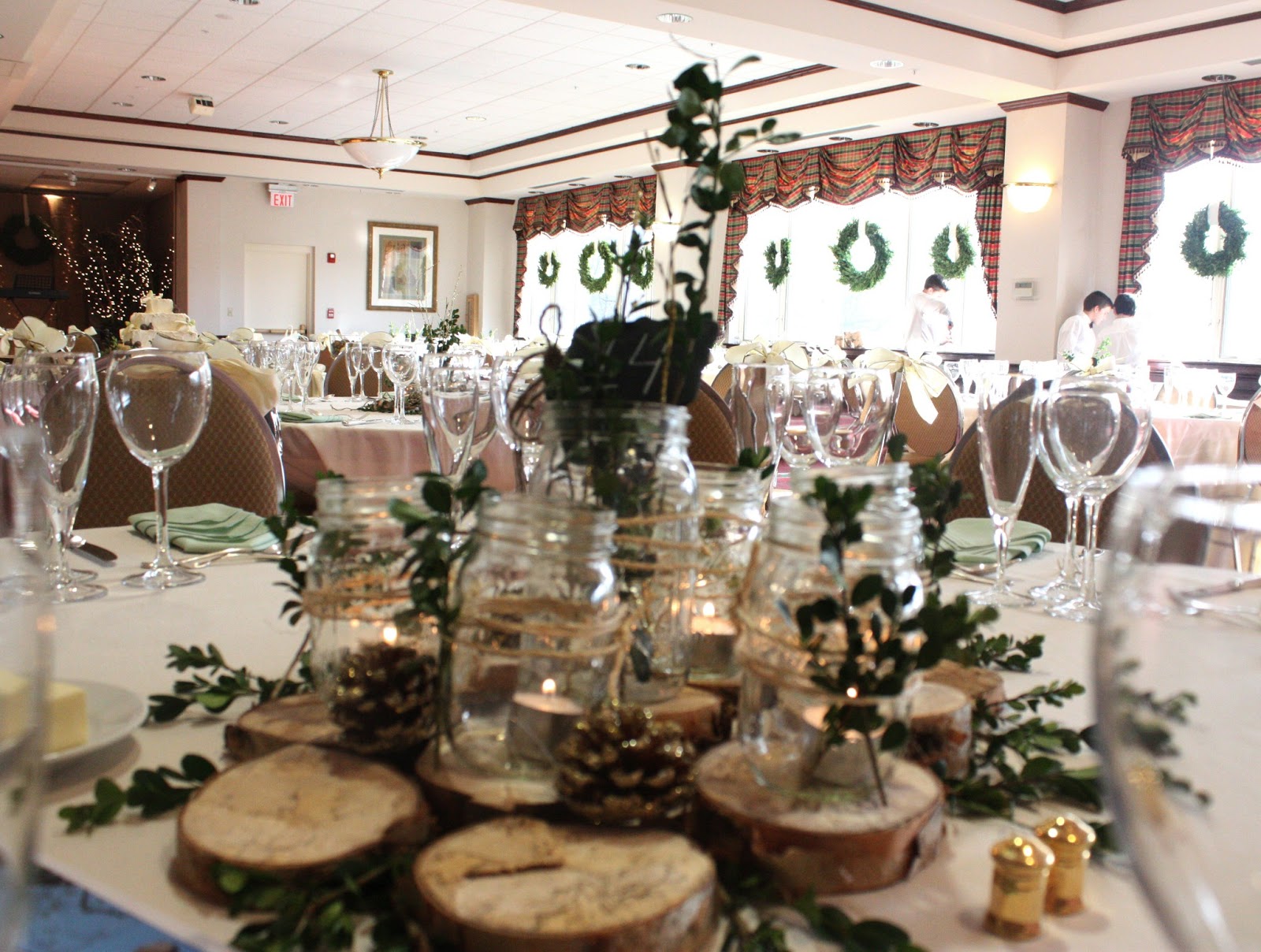 We made the centerpieces by slicing birch branches (the bride found a fallen birch tree on craigslist, and she and the groom brought tons of logs over to my house to use my favorite tool (chop saw! Thanks team Fleurir!) to cut the logs into disks. Then I layered the disks with twine wrapped mason jars holding tea lights, placed sprigs of cut boxwood around the disks and in a large jar in the center. And then to add a little sparkle, we sprinkled around gold-dusted pine cones and a few gold branches. We used mini chalkboards to mark the tables: 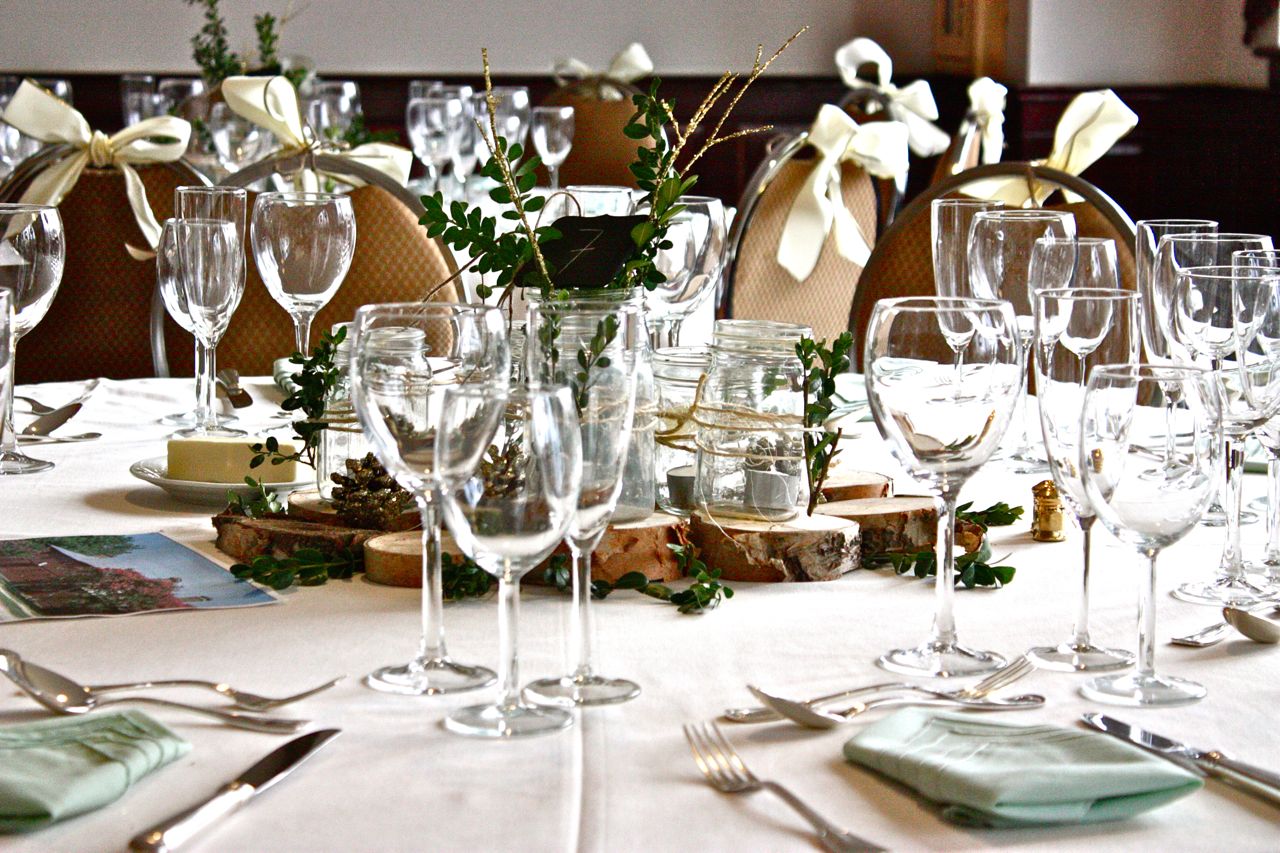 Like any project, there were some unexpected moments...like getting a band last minute and needing to use the stage...which meant needing to decorate the stage...very last minute. It turned out to be one of my favorite parts. We draped white Christmas lights over some room dividers, covered it with burlap, then placed boxwood wreaths on top, which mimicked the arrangements on the windows. Then we placed lit trees to frame the sides of the stage. 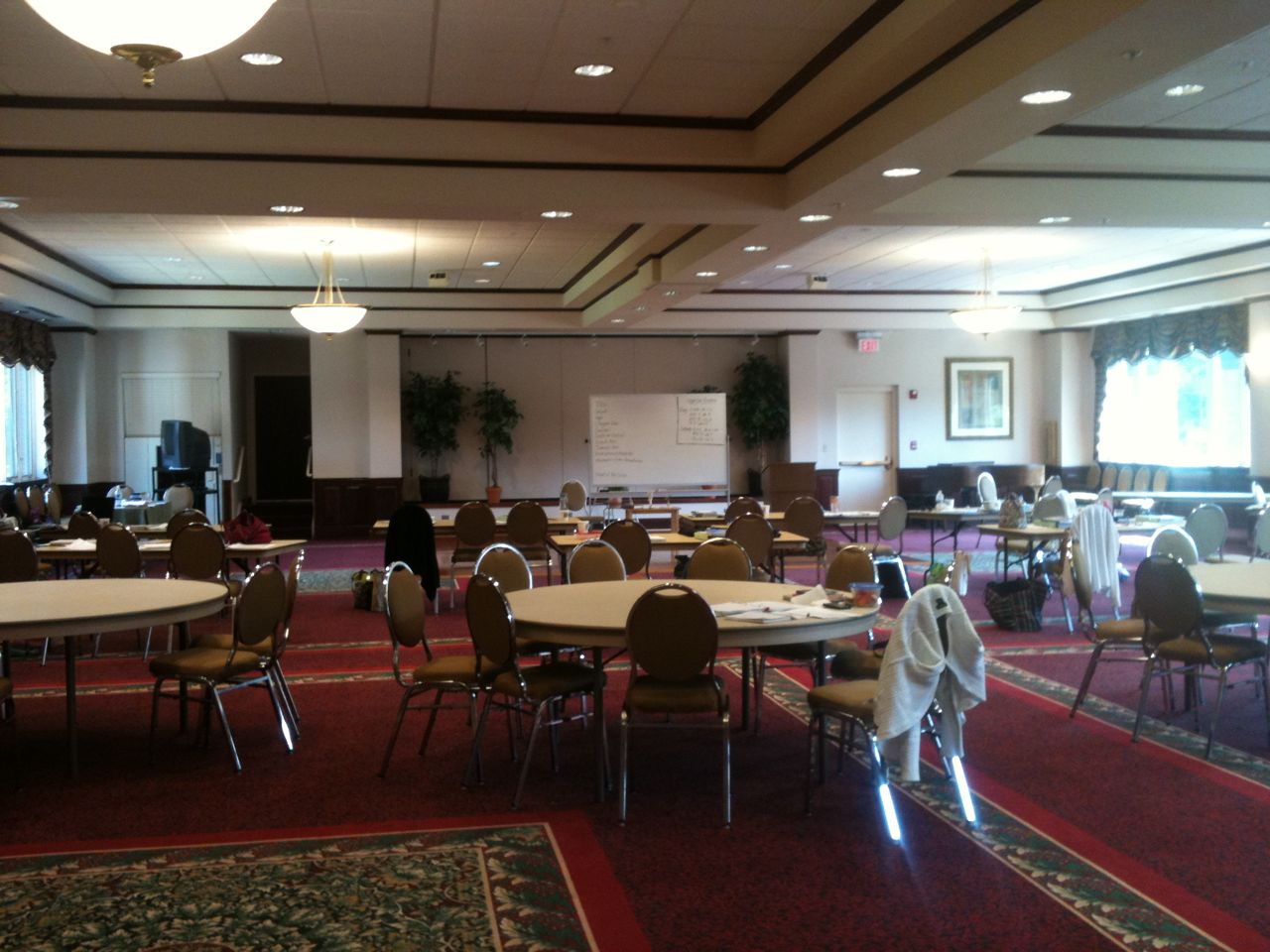 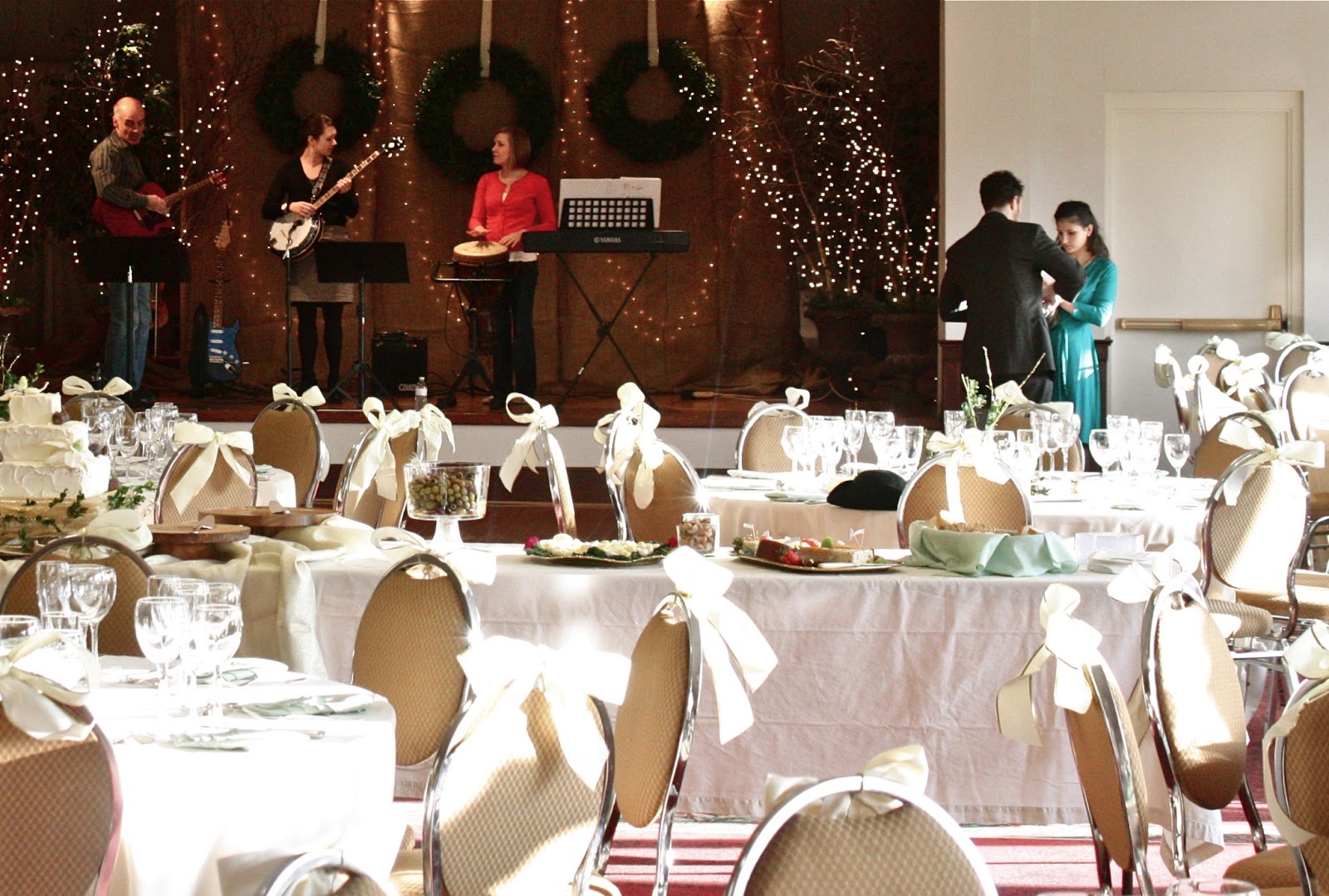 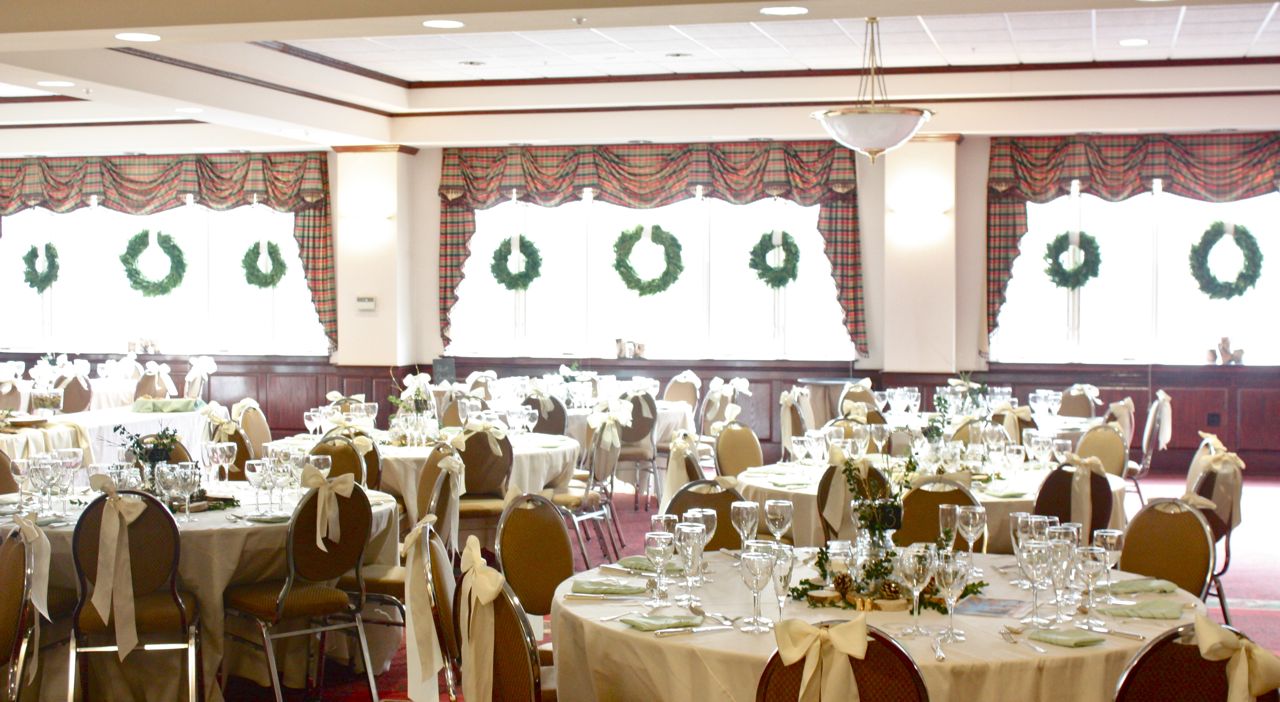 The bride made the cake. It was a Williamsburg orange cake, and probably on the best looking and best tasting wedding cakes ever made. The "cake stand" was another last minute, unanticipated project.... the original one never materialized, so this was done up just before the cake was sent out to be displayed....dI wish I could go into more detail, but suffice it say that I consider this gold burlap and boxwood wrapped piece of styrofoam to be a minor miracle. What I love about using natural materials and natural themes, is that imperfection is a given, and so it's hard for anything to look out of place. 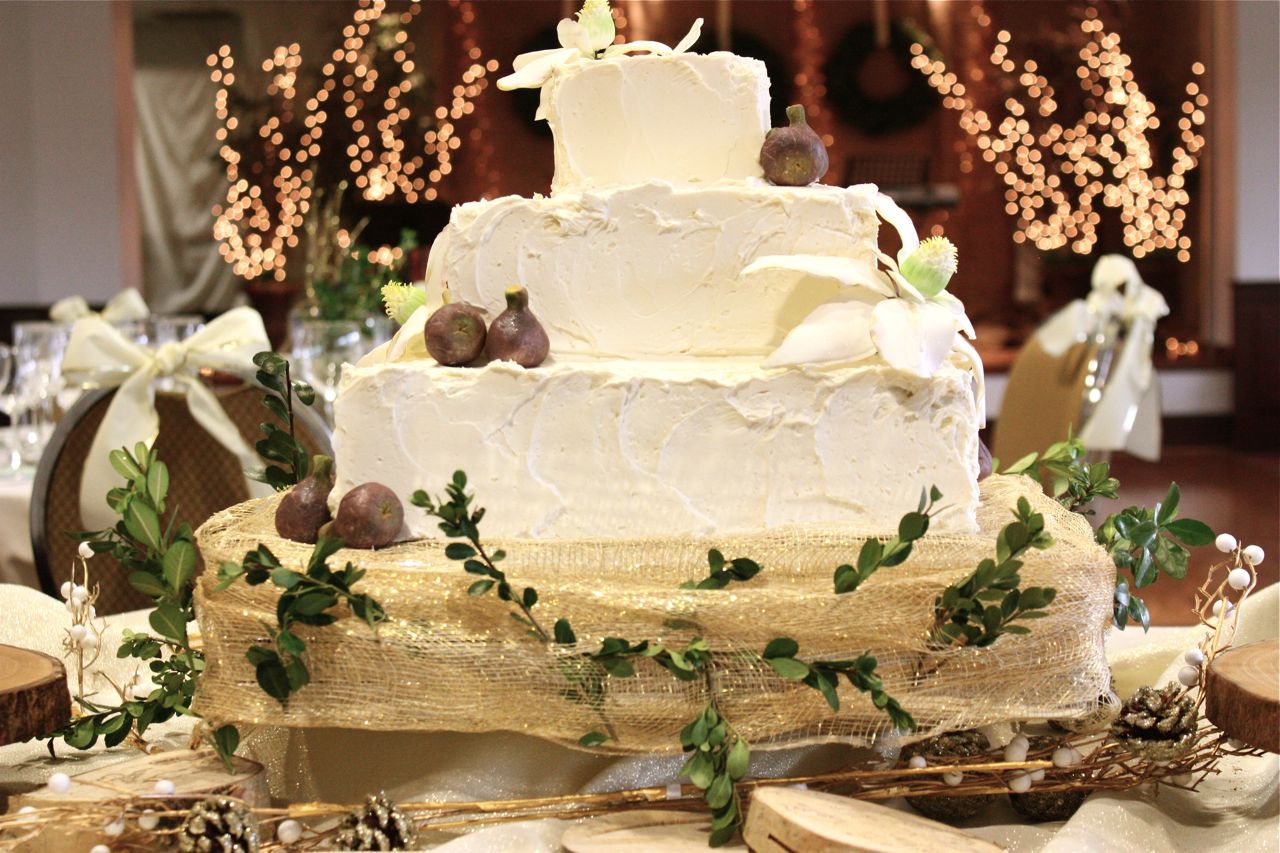 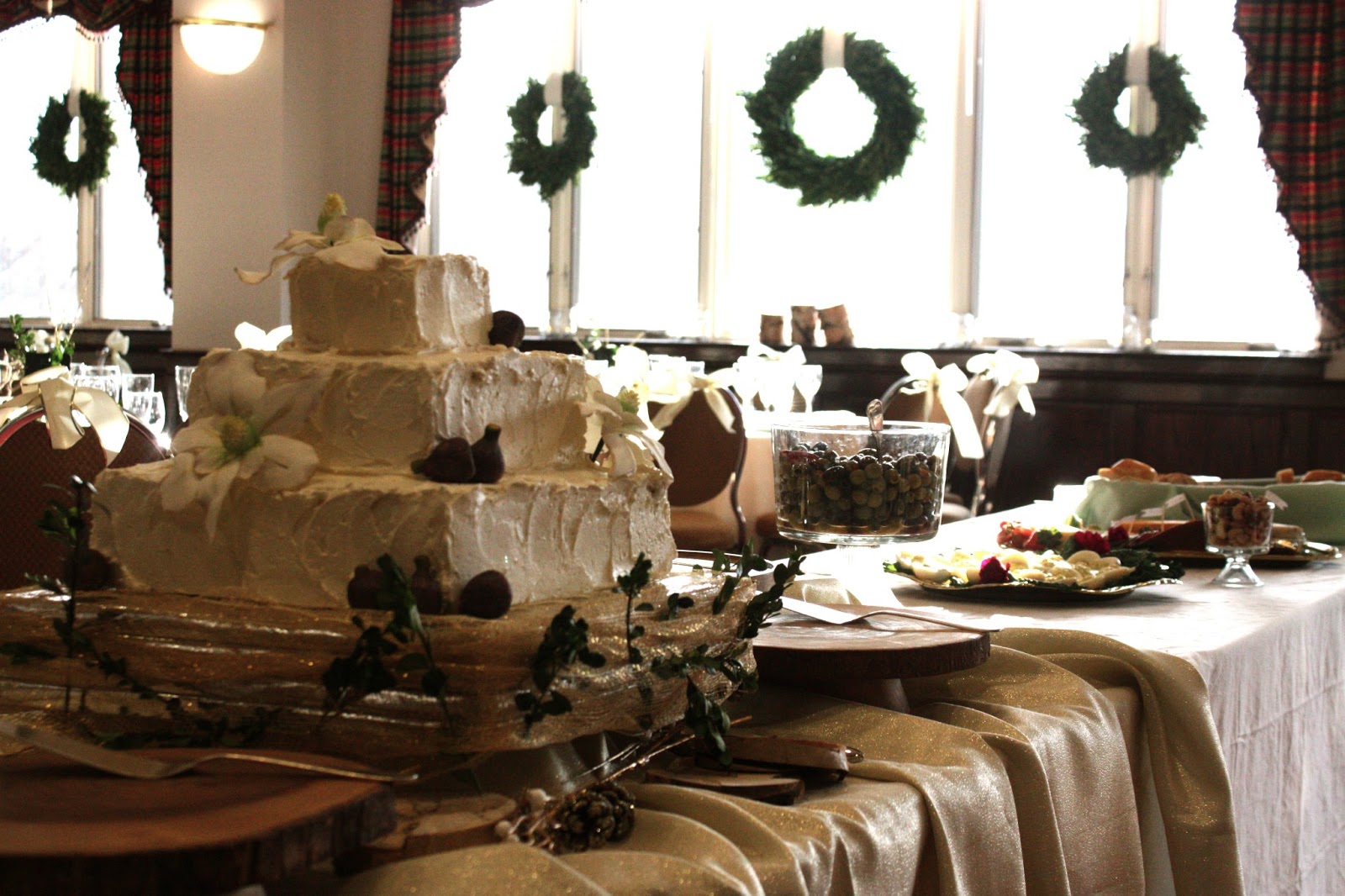 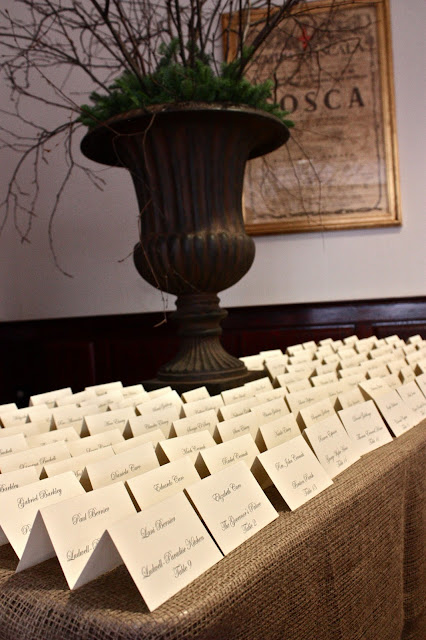 The reception started just as sunset was beginning and the lighting was so beautiful! 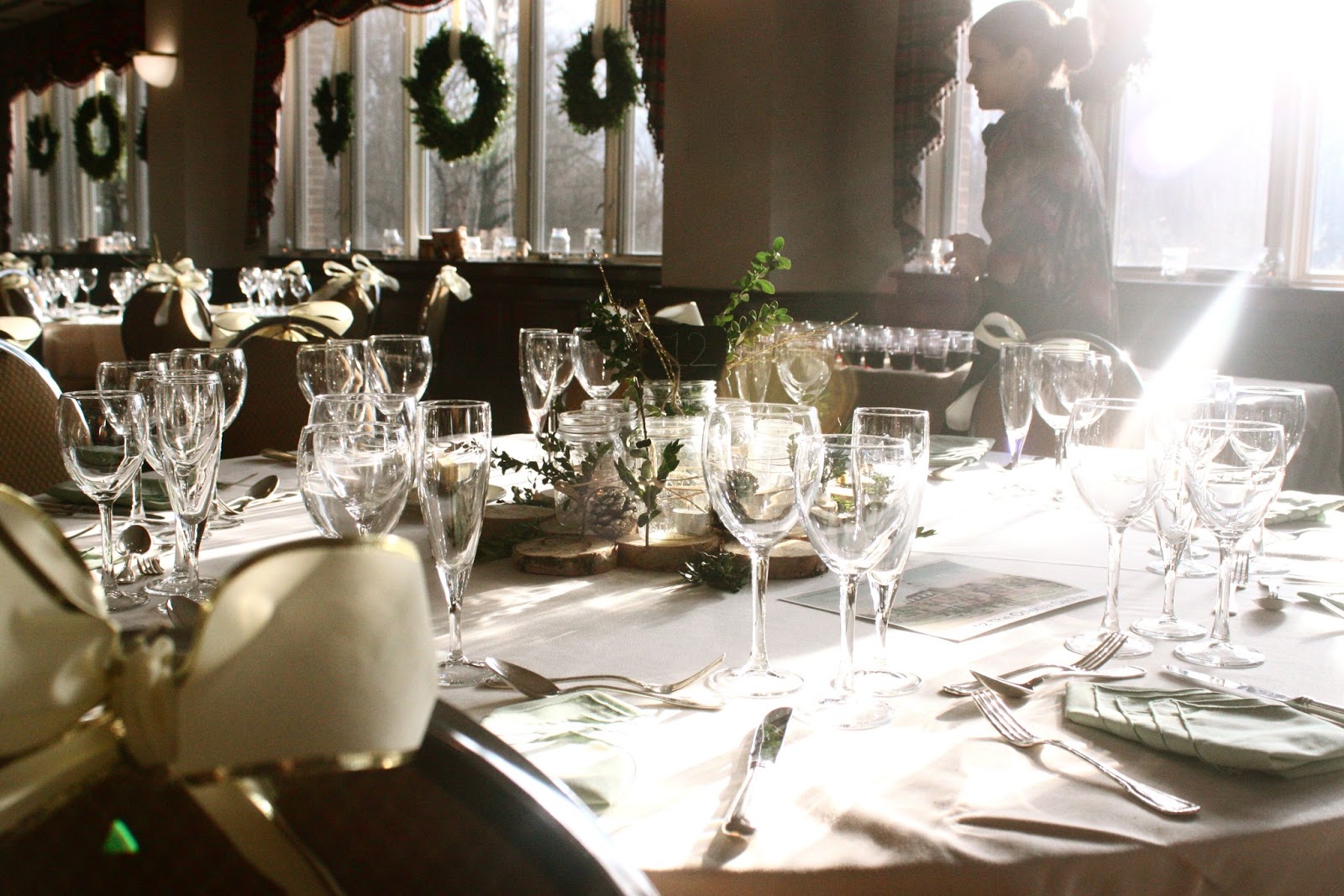 it made my gold branches look particularly pretty against the burlap... 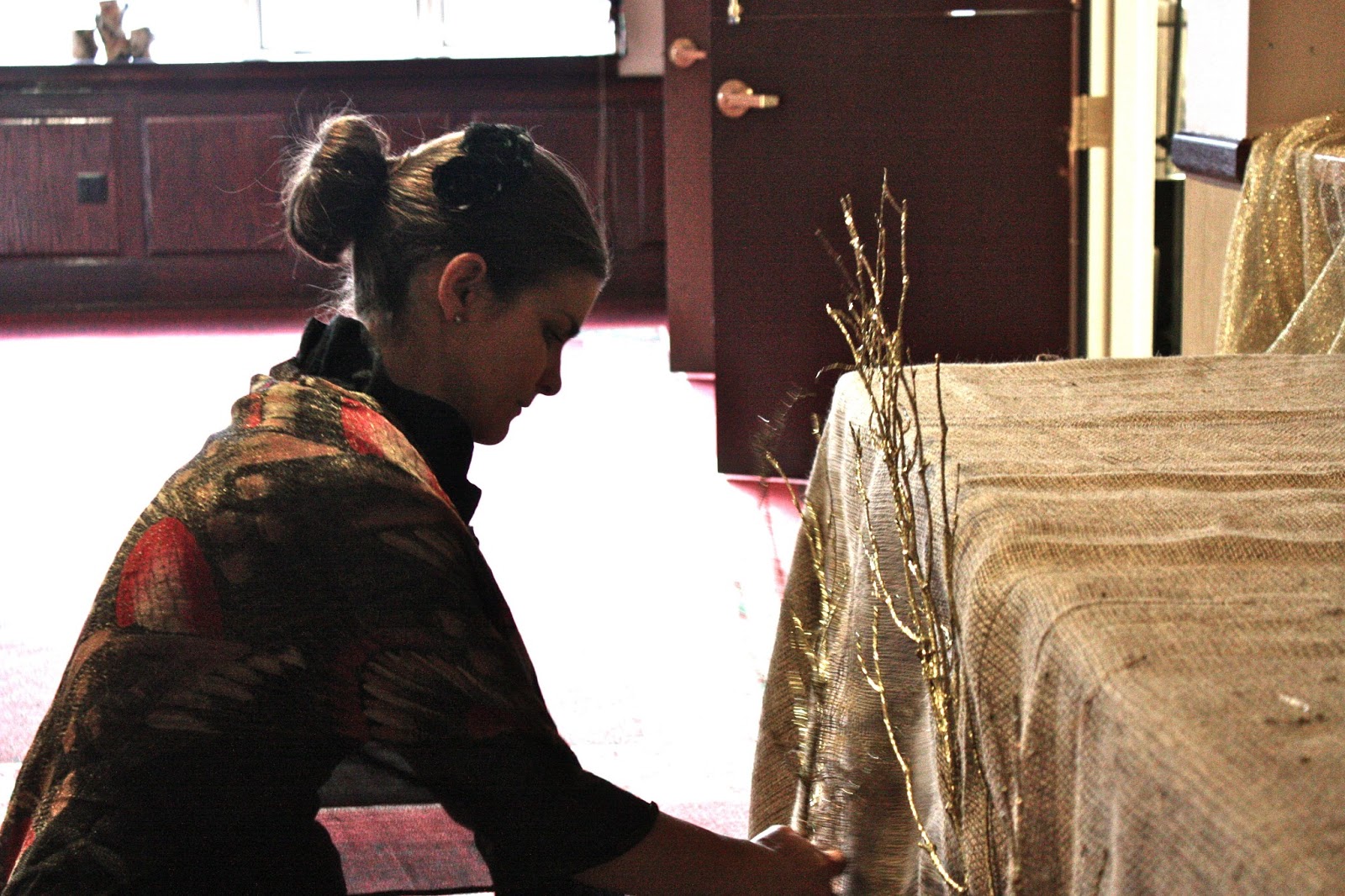 And then once it was dark, the centerpieces looked even more lovely.... 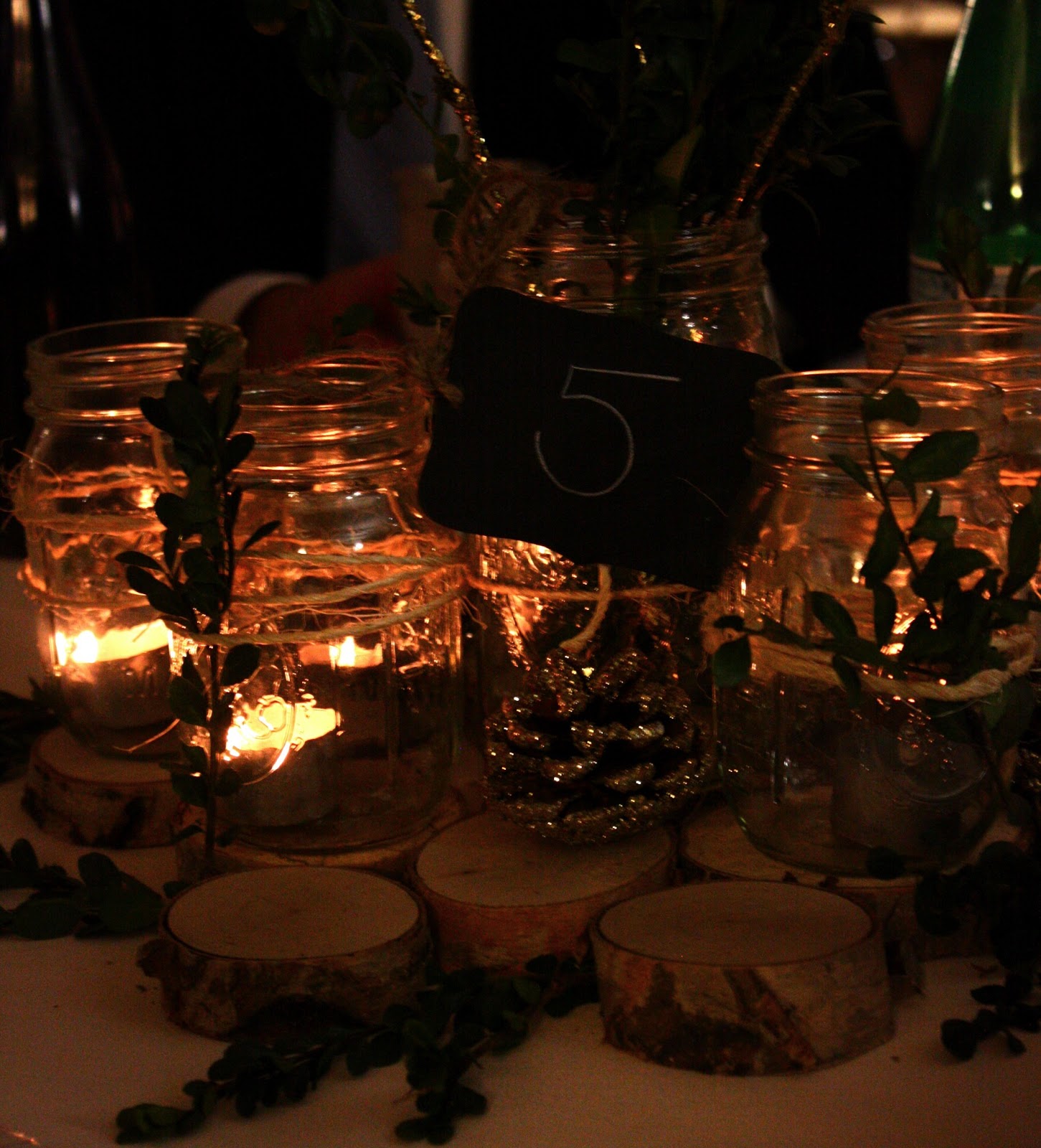 but, obviously, the best part about it, was seeing the bride look so happy! 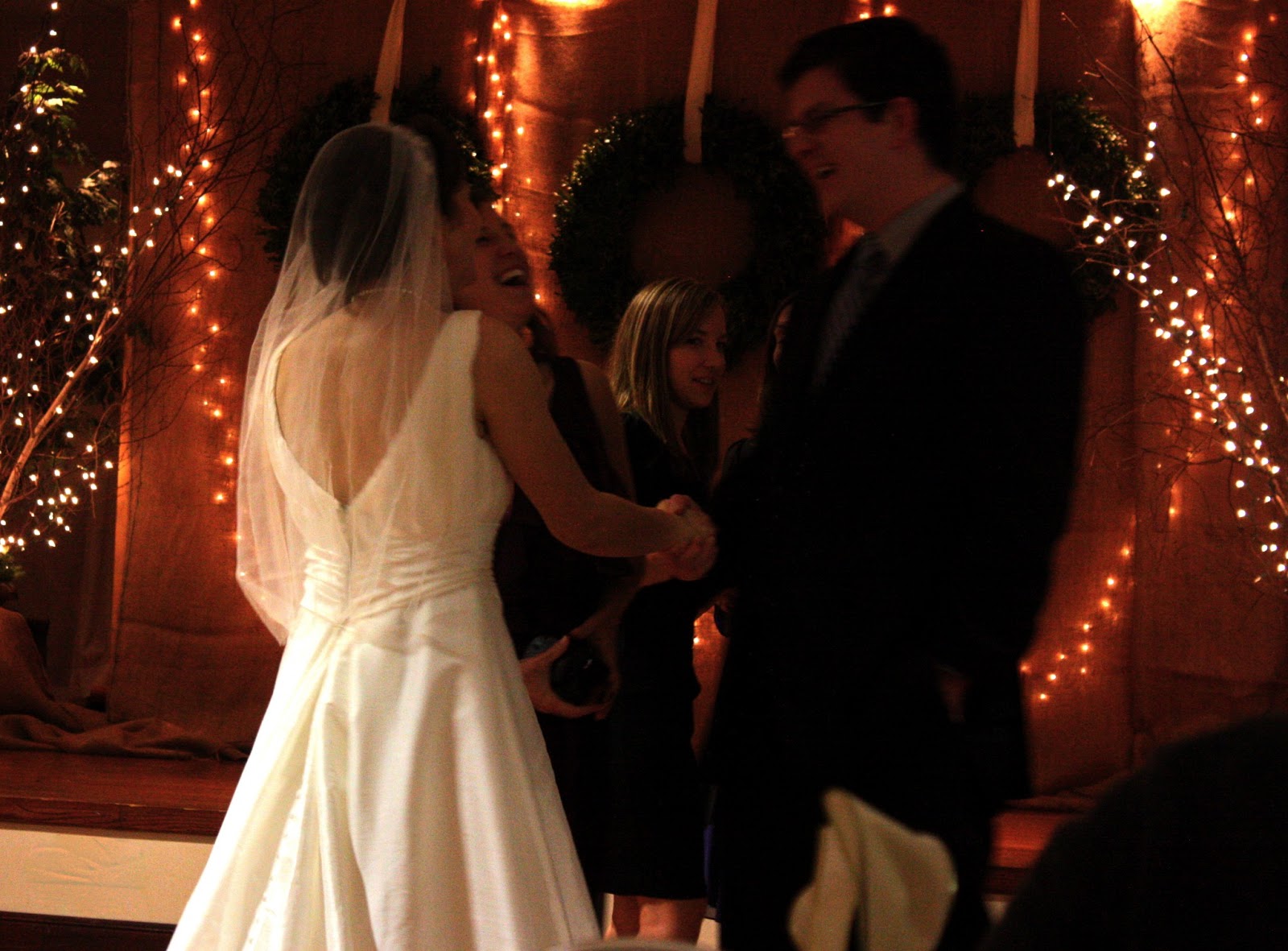 Where to begin? Let's start here...

since it's still officially Christmas season, I'll begin with MERRY Christmas! I hope yours has been bright and blessed! 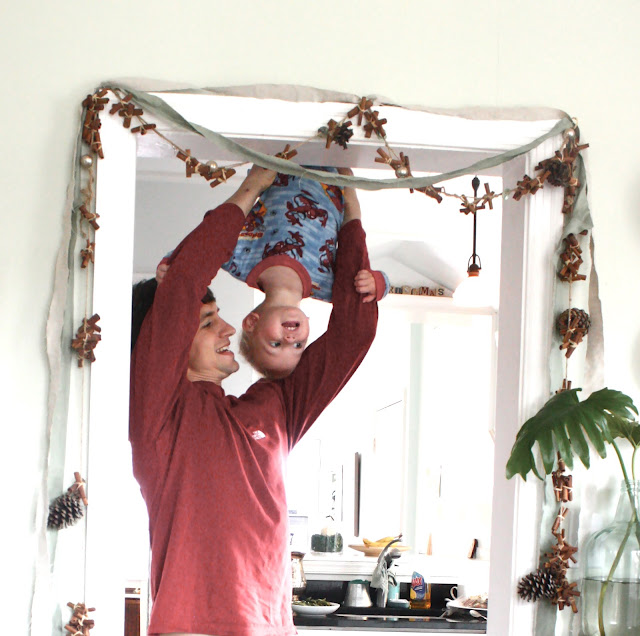 This year was very different for us. Not just Christmas, but all of 2012. I would say that it's because we've finally hit our stride as a family, but I don't think that's really the truth. It's been a very blessed and providential transformation for our family, and I don't think we can pretend to take credit for half of it.  It's been a time, the first time maybe, that I've felt that our priorities have been straight. The path hasn't always been so straight or painless or pretty, but now that we are on it, there's no hesitation or doubts that it's the right one. 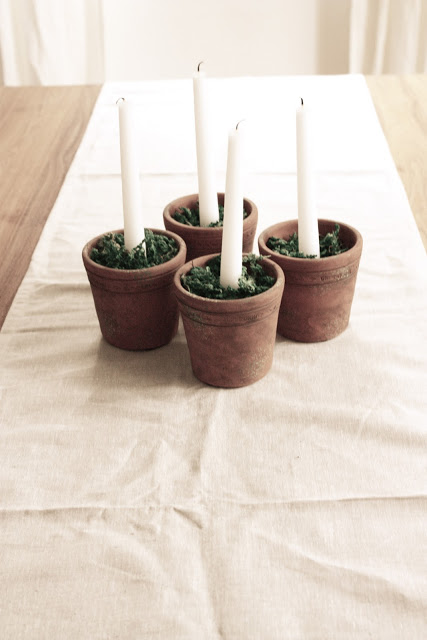 As for Christmas, commercialism took back seat. That wasn't totally intentional. A few weeks before Christmas my parish priest asked if I could find some fabric to dress up the back altar of our less-than-beautiful 60s church. "Sure!" I said, thinking it would be a matter of an hour or so selecting and ordering just the right one. He's been awesome to our family--a huge part of why this year has been transformative and incredible for us--and I was excited to help in a small way. However, selecting fabric turned into creating an entire plan for the Christmas decorations. And...it was awesome. The whole thing! The installation was by far the most fun I've had during any project. There were so many hilarious moments,  and the people who volunteered from our parish were super competent and good-humored...even when they saw bossy Leah in action :) We finished up around midnight just in time to welcome Christmas eve, and when it was all done and we turned out the lights to admire our work, we all kind of gasped. 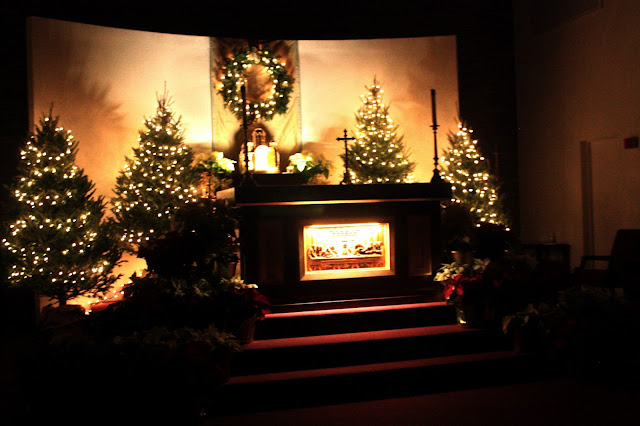 You may not be able to tell from the blurry photo...but trust me, it looks pretty sweet. 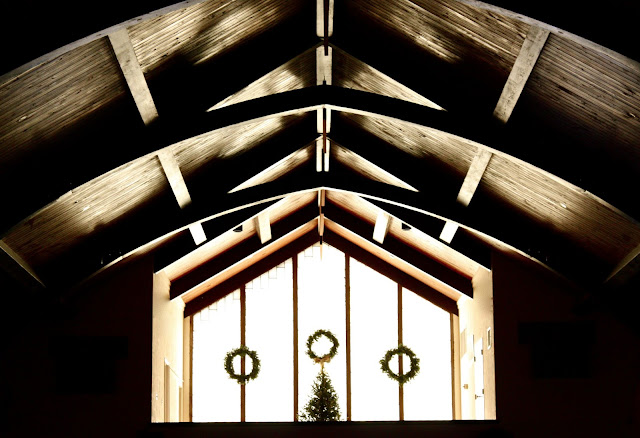 One silver lining to the extra and unexpected busyness of taking on that project was that the things that usually stress me out during the weeks leading up to Christmas, didn't. I just didn't have time to think about them. And they still got done. And as a result, the time we spent with family and friends was more blessed and more meaningful than in the past...because I was able to just be...present....something I've heard about forever, but don't think I actually experienced fully until this year.

When Christmas did hit our house, it was all the sweeter. We didn't go all out on presents...we used ugly wrapping paper...and made shortcut versions of our usual Christmas morning treats. And the kids were just as happy, maybe happier... 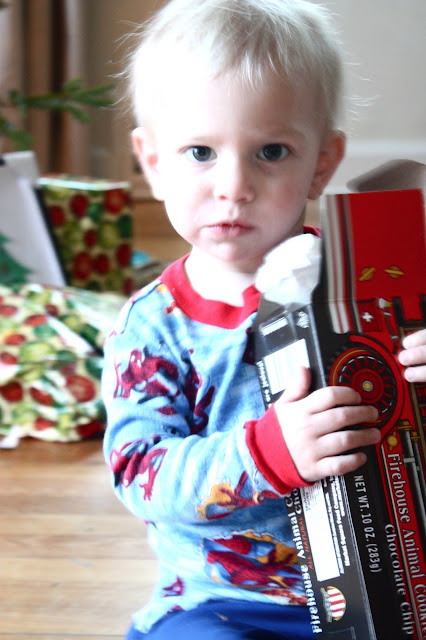 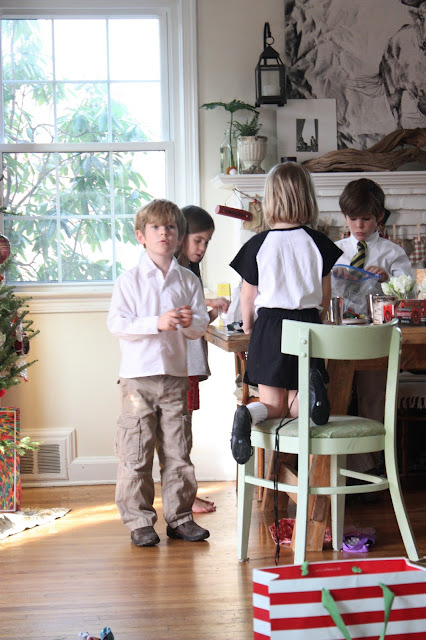 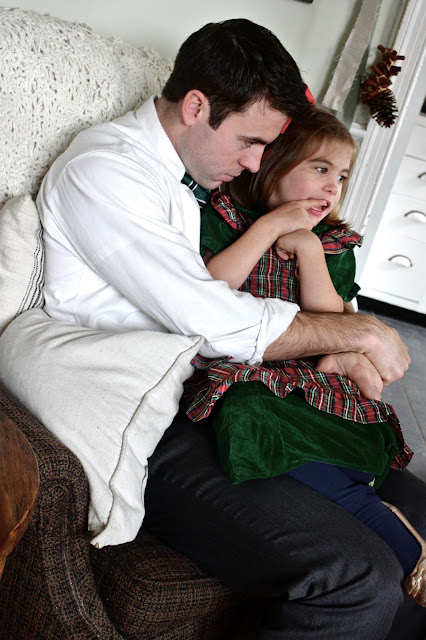 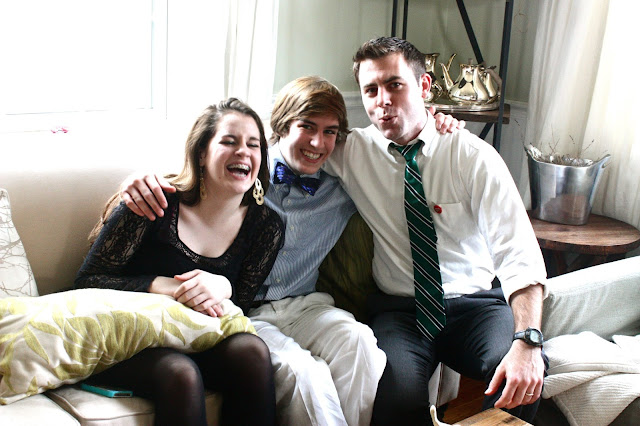 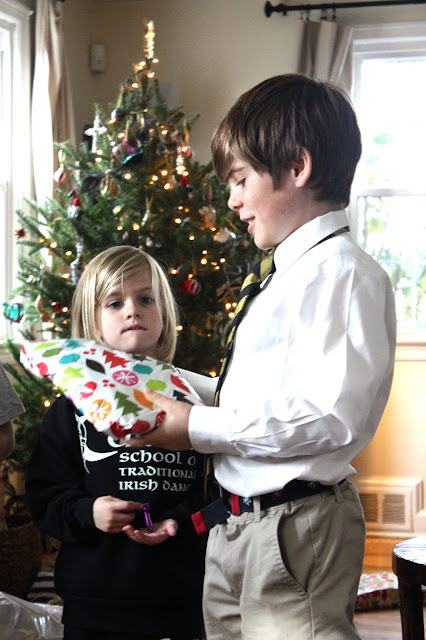 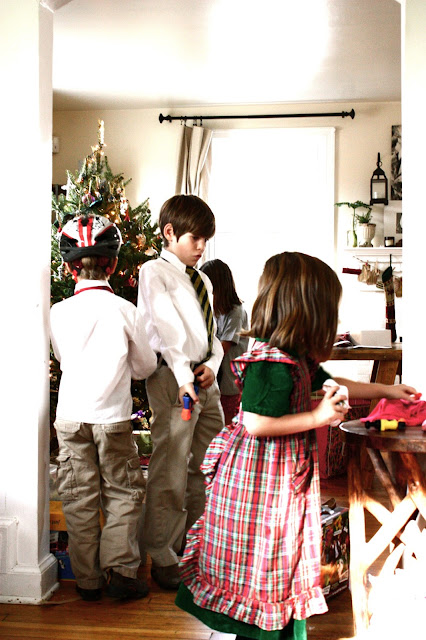 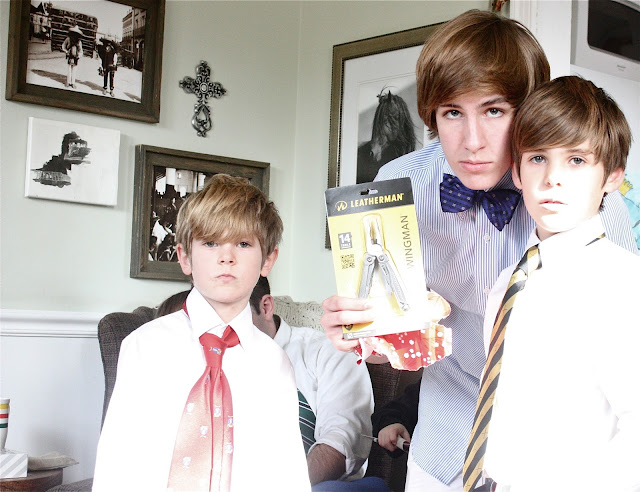 (this last one kills me...there was a funny unplanned "survivor" theme to the presents this year, so I told my nephews and little bro to look hardcore for the camera...but I think it looks more like a j crew add...so way to go, hardcore handsomes :)