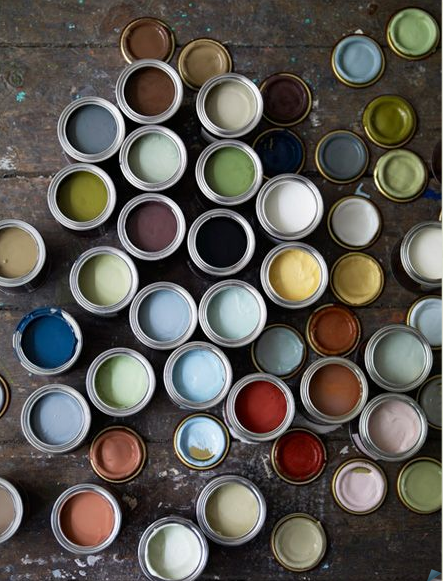 (Twig Hutchinson)
In this house life moves fast but design moves slow...very, very slowly. Tragically slow I often think. Mostly because things always seem to be in flux (a long term guest or a new baby or a stomach flu or...), and I am my own worst enemy when it comes to executing designs in my own home. Many times I know what I want, but I usually convince myself that I can create it by myself...afterall I love the creative process and using things for other purposes, which means lots and lots of projects. I'm happiest when I'm creating. But starting the creative process is one thing, and finishing them is another. My perfectionist tendencies often convince me that a project is far from finished.

Well, last night Rich reminded me that one of the reasons I started my blog and my design business was to meet people where they are. People without perfectly deep pocketbooks or perfect homes. It was really because I realized that beauty is essential and attainable....regardless of budget or time constraints or "the perfect." It had nothing to do with the perfect and everything to do with the real. Most of us don't really desire a magazine home, even if sometimes that seems very nice. But in reality we'd be perfectly happy with a comfortable home that invites relaxation, creativity, and peace.

So on that note, over the next few weeks I'd like to share a few points of progress on the home front, however far from finished they seem to me:

First up, our den:

My computer crashed shortly after we moved in taking nearly all of my beloved "before" pictures with it. So I don't have many that accurately show what the house looked like originally. This room started out as our bedroom. It came with 3 blush pink walls (and blush ceiling) and one purple brick wall (looks black in this pic but with the light on it was definitely purple): 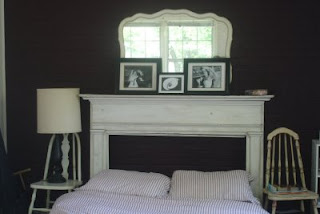 Shortly after moving in it became my office, and then a craft room, and then a giant closet, then a work out room, then a playroom... 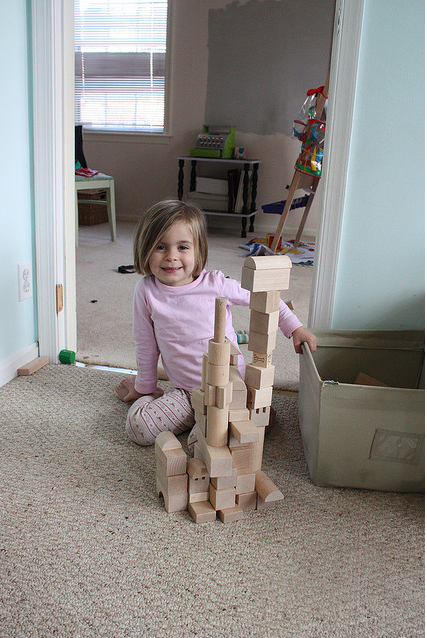 ....and then our nanny's room, and then a giant closet again, and then what eventually became known as the "man room" where all things Rich went--skate boards, snow boards, guitars, books, power tools, bikes, weights...you get the idea. Then we received some very nice gifts form family: a real tv and media console, and we began to think about how we could turn this exceptionally long and narrow space into an inviting space for watching movies and hanging out. A place that wasn't too grown up or too kiddy... and that worked aesthetically with the random mix of furniture and accessories that we already had. No small task!

First addition was a Craigslist sofa....Rich insisted on comfortable, and I agreed despite my aesthetic reservations.... 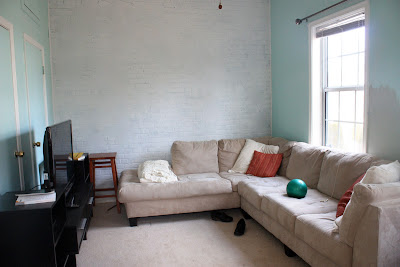 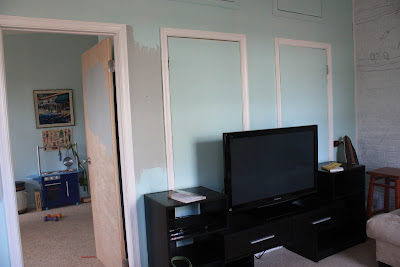 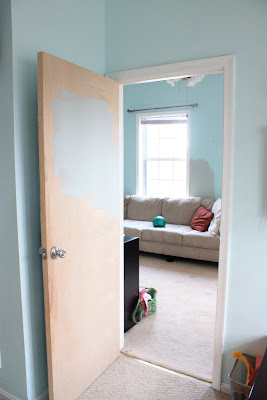 We debated over colors for many months, out up tons of swatches (why is decorating your own house so much harder than decorating for someone else????) then realized that other places in our old house demanded more attention. So anything we did to it had to be free or really really inexpensive and by that I mean basically free....and so it stayed like this for many months.... 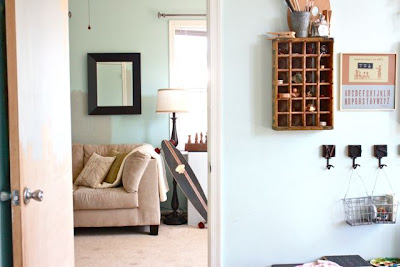 I came up with some ideas of how I wanted it to look, which you may remember from this post.
And recently we picked up the pace, and with some left over paint, a DIY rug (more details on that later), discounted indoor/outdoor pillows from restoration hardware, and fabric from calico corners, we moved right along 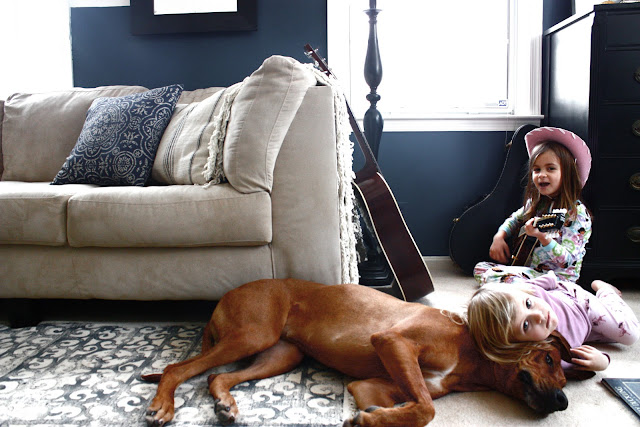 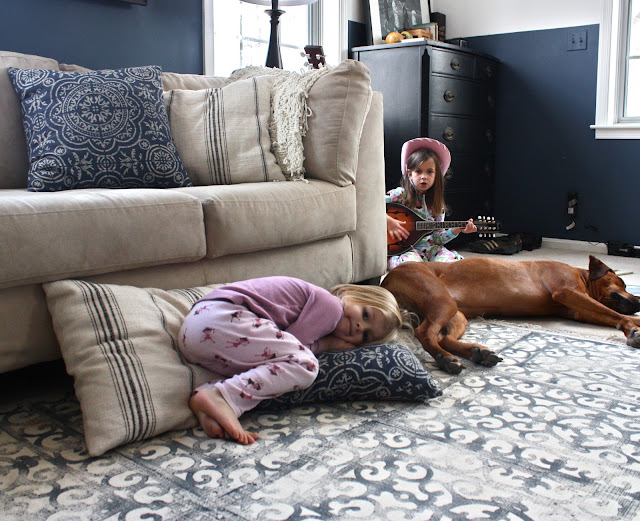 We have some loose ends to finish up, but for now as you can see it has become one of our favorite spots. 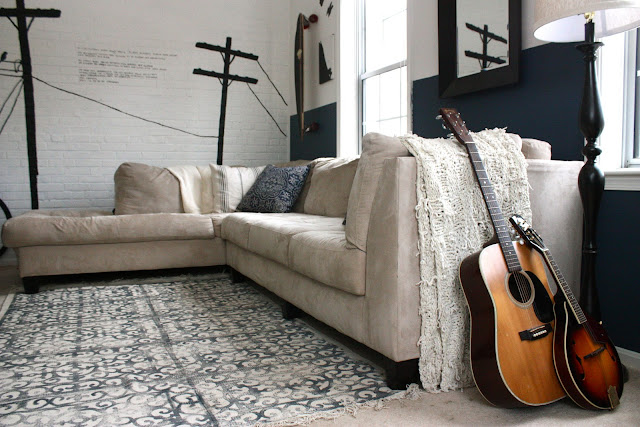 The room still has many functions: bike (and skate board and snow board) storage, Rich's dressing room, family tv room, music room, play area, so I wanted to keep the colors simple and mostly neutral and let the functional objects also be the main decorations. I'll explain more details later but the wall mural (which still needs to be finished) was inspired by the one at the sub*urban trading company in Kensington, and the poem that I stamped on the wall is one of my favorites. I first spotted it in Rich's parents house:
William Henry Channing's, "My Symphony":
To live content with small means;
to seek elegance rather than luxury,
and refinement rather than fashion;
to be worthy, not respectable,
and wealthy, not rich;
to study hard, think quietly,
talk gently, act frankly;
to listen to stars and birds,
to babes and sages, with open heart;
to bear all cheerfully, do all bravely,
await occasions, hurry never.
In a word, to let the spiritual,
unbidden and unconscious,
grow up through the common.
This is to be my symphony
Posted by Leah Moss at Wednesday, January 12, 2011

Email ThisBlogThis!Share to TwitterShare to FacebookShare to Pinterest
Labels: before and after, decorating tips, decorative painting, home design, our house, paint, progress